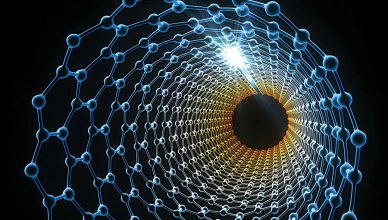 Long Carbon Nanotubes Could Have Carcinogenic Effect Similar to Asbestos

15/11/2017AdminSudoe
Nanotechnology, the science of creating materials possessing very tiny fibers, is having an increasing influence on everyday life. Currently, researchers have demonstrated for [...]

Assessing the risk of nanomaterials: GUIDEnano in brief

As nanotechnology is expected to permeate all sectors and industries, it may lead to an increased concentration of these materials in the workplace, increasing the opportunities for indoor exposure to aerosolized nanomaterials (NMs).

Nanomaterials are emitted by a broad spectrum of potential sources that can be classified according with different criteria such as the origin (i.e. natural, accidental or anthropogenic) or the activities resulting in the release (e.g. fugitive emissions, handling and transfer of bulk NMs, mixing operations and/or abrasion of nanoproducts).

The number of published data on the levels of exposure to NMs in the workplace has increased substantially over the last years. Characterizing the release of airborne nanoparticles during synthesis, downstream use, application or treatment of product containing embedded NMs has always been a subject of interest in workplace air quality measurements. However, a lack of understanding still exists on the mechanism that governs the release of NMs in occupational environments.

The routes of exposure are well characterized, being inhalation the most common route of exposure to airborne NMs in the workplace. The skin has also been investigated, however, most studies have shown little to no transdermal NMs absorption. Oral (gastrointestinal) exposure can occur at the workplace from intentional ingestion, unintentional hand-to-mouth transfer, from inhaled particles > 5 μm that are cleared via the mucociliary escalator, and of drainage from the eye socket via the nasal cavity following ocular exposure .

While many potential benefits are expected from the development and commercialisation of NM products worldwide, the associated risks of exposure to NMs may often be ignored due to the lack of available toxicity information. Despite the fact that the major effect of particle size on materials’ toxicities has been specified in the past, the effect of particle size on the behaviour and reactivity of nanoparticles remains unclear.

The uncertainties are extensive since it is now well-established that NMs exhibit unique physical and chemical properties different from those of the same material in bulk form, affecting their physicochemical and biological behaviour, which can lead to adverse effects to both humans and the environment. Materials produced in the industrial sector, such as carbon black and Titanium, previously regarded as harmless due to their bulk form properties, could be considered a hazard in their equivalent nano-form.

Therefore, a proper assessment requires the development of appropriate laboratory methods. The unique physicochemical properties of solid materials at the nanoscale level contribute to major technical limitations, which may induce misleading results generated by conventional toxicity assays. To prevent misinterpretation of in vitro data, there are significant issues that need to be addressed such as inclusion of relevant controls, assessing the ability of particles to interfere with the assays, particle dispersion, and using systematic approaches.

One of the issues is the measuring metrics. Regulatory standards for airborne particulate matter are currently mass based. However, toxicological findings on the size-related and size-dependent toxicity of nanoparticles have led to suggestions of establishing alternative metrics. Size, shape, surface area, composition, and solubility are all parameters required to characterize exposure effects of nanoparticles. Based on the current knowledge gaps, researchers use mainly particle number concentration to characterize the exposure, and surface area to study further toxicological effects, while a common agreement is stablished.

Because physical rather than chemical properties determine particle transport indoors, the following set of characteristics has been proposed to describe nanomaterials in toxicity, exposure, and fate and transport studies:

The inherent properties of the NM determine the so-called substance emission potential, which describes the potential of the product to become airborne. For particulate agents, the potential to become airborne is dependent on dustiness. For liquids and liquid mixtures, the potential to become airborne is dependent on volatility, and parameters such as the concentration of solute, diameter of dispersed particles in liquid and viscosity. For powders, the emission potential is influenced by parameters such as particle size (distribution), aggregation, coalescence, cohesion, moistness of product, and surface modifications, all of them properties influencing the dustiness of the material. 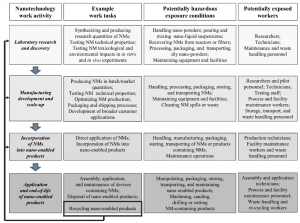 Figure 2: An analysis from Iavicoli I. et al (2014) showing potentially hazardous exposure conditions for workers involved in nanotechnology activities. Note how the recycling of nano-enabled products over time may result in changes in the composition of workplace exposures.

An overview of the main exposure parameters and specific issues related with the use of NMs in occupational settings are:

It should be noted that much of the factors can be influenced by personal behaviour and skills of the individual worker. The way the nanoparticle is handled, or the performance of activities such as mixing or stirring may be very prone to behaviour, with a direct impact on the release potential of the activity.

Comprehensive NM characterisation is required for the risk assessment process. Therefore, different NM profiles need to be developed including physicochemical profiles, hazard profiles, and exposure profiles. In the absence of adequate exposure and toxicological profiles, the hierarchy of control measures need to be implemented to ensure the protection of human health and to avoid underestimating the potential risks of human nanomaterial exposure.

Recent studies focused on the quantification of the release of NMs in occupational settings show a significant release rate in processes involving the application of frictional forces and pressure, both resulting in the release of NMs. Mayor concerns are expected from wide dispersive applications such as the spraying of liquid dispersions containing NMs and grinding processes. In these process, where the likelihood of release has been considered very likely, is highly recommended the implementation of controls to avoid the transport of the particles released from the source to the receptors.

Other conventional processes such as harvesting and cleaning operations can generate a significant release of NMs, being highly recommend implementing administrative procedures and controls aimed at reducing the release of NMs to background levels.

The exposure to NMs in the workplace will depend on the type and characteristics of the source, as well as on the processes altering the properties of the nanoaerosol during the transport from the source to the receptor (i.e. particle breathing zone). Understanding the link between release, transport and exposure is therefore essential for risk assessment purposes.